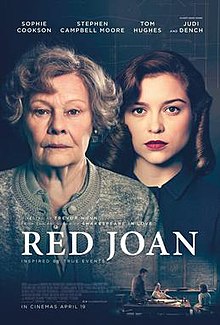 Red Joan is based on a novel of the same name written by Jennie Rooney, which was itself inspired by the life of Melita Norwood. Norwood worked at the British Non-Ferrous Metals Research Association as a secretary and supplied the Soviet Union with nuclear secrets. The materials that Norwood betrayed to the USSR hastened the pace at which the Soviets developed nuclear bomb technology.